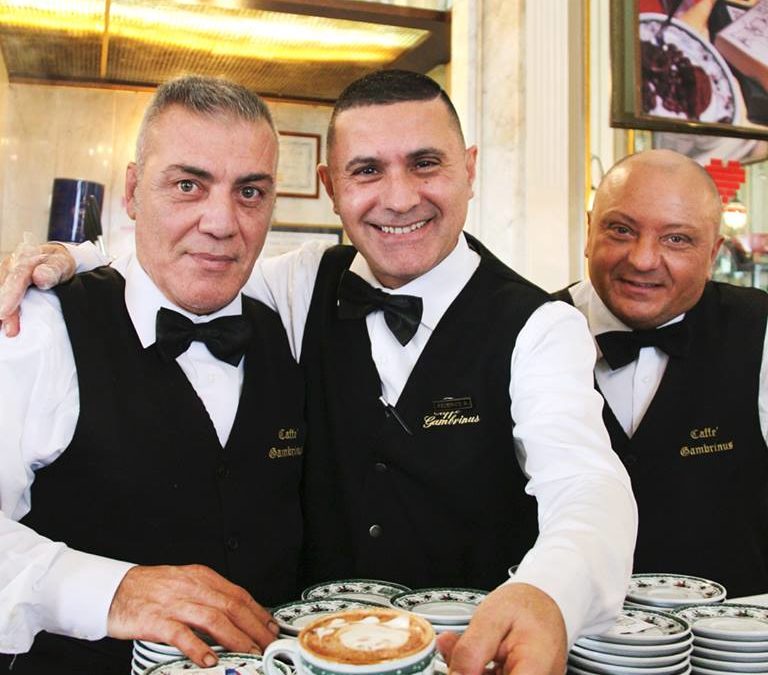 How tourists drink coffee in Naples

A generous, hospitable, chaotic and in some ways still undiscovered city, Naples enters the new millennium with a positive energy thanks also to the rediscovery of its own history, for too long forgotten, thus becoming one of the most important tourist centers of Europe of the last ten years. The real resource, in reality, is not the monuments or the stereotypical image of the panorama of the gulf with a lot of smoking Vesuvius but our culture, our folklore, our music and our cuisine. And it is only by living this metropolis of a thousand culures, going to the discovery of little-known places, joining the locals and walking through the alleys, between a tarantella and an O Sole Mio, between a wallet pizza and a suspended coffee, which you can begin to understand the philosophy of life of this ancient and still uncontaminated land.

And it is for all these reasons that taking a coffee in the capital of Campania has a magic and a meaning that cannot be found anywhere else in the world. It is written on the guides, the television always remembers it, it is the most classic of word of mouth: when you go to Naples you have to try this famous coffee with the three “C” (cumm cazz coce that translated into Italian is like c *** o sheet because served in a very hot cup). “I have to try this famous Neapolitan coffee” is the beginning of the stop at the typical visitor’s bar in northern Italy. After enjoying the coveted drink, the tourist, now conquered by the mythical tazzulella e e cafè, addressing the bartender, formulates the most typical of the questions: “but how is it that in Naples coffee is better?”.

Unlike the visitors to central and northern Italy who prefer the classic Neapolitan espresso, those from the central-south area prefer the most famous gourmet coffee: the hazelnut.

Not only Italian tourists but also many foreign ones who, no one knows why, but based on nationality they have a specific preference in terms of coffee. If the American loves to drink Double Espresso, the Japanese always ask for the “scrambled” coffee (the classic espresso with the addition of sugar and cocoa cream) recommended by all Japanese guides.

The Germans, on the other hand, are great lovers of cappuccino and the one prepared in Naples is their favorite because the Neapolitan coffee contained therein with a strong and intense taste makes the cappuccino even better. The German, however, unlike us Italians who we usually drink mainly at breakfast, drinks it throughout the day, often combining it with ice cream or pizza.

The Spaniards are lovers of cortado coffee that resembles our macchiato coffee.

The French, for their part, prefer to taste the coffee in an atypical variant of the Neapolitan canons: very long, in contrast to the “restricted” coffee that the Neapolitan purist drinks at the bar. It should be emphasized that the Alps undoubtedly combine coffee with the most typical sweet of our pastry: the babà.

The Chinese, the last to have discovered Naples, do not have a particular preference for coffee but they like to try the various variations of coffee made in Naples (such as Barbagliata, the coffee loved by Gioacchino Rossini when he was musical director of the Real Teatro San Carlo in Naples).

The Russians ask for coffee and sfogliatella trying so, too, to enjoy the typical Neapolitan breakfast.

We close this unusual excursus on coffee preferences, with the English, who in the collective imagination are considered exclusive tea drinkers but when they visit Naples inevitably and regularly fall in love with our coffee, thus respecting the verses of the famous song ‘O Cafè di Modugno:

E ll’Inglese se scorda do the’,

A special classification for Neapolitan coffee