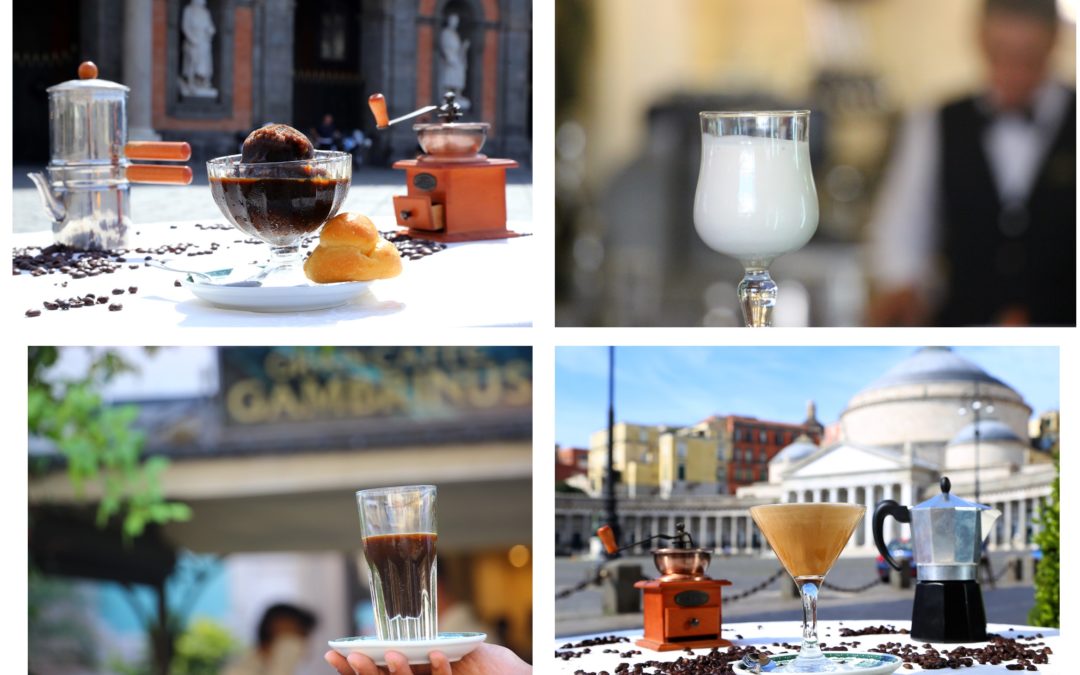 Eduardo De Filippo used to say that a Neapolitan can give up everything except a cup of coffee. Deep connoisseur of Neapolitan things, the great Neapolitan dramatist certainly was not wrong. In summer, however, with the arrival of heat, not everyone likes to drink the classic hot coffee served moreover in the cup that “coce”. For this reason the Neapolitan bartenders have developed, over the years, variants and solutions to satisfy the demanding tastes of the demanding (at least in terms of coffee) Neapolitan people. Here are some “summer” recipes based on coffee, known and less known, created at the foot of Vesuvius.

Let’s start with Neapolitan Coffee. Drunk mainly in the summer months is the alter ego of classic coffee. The difference between our “cold” and that prepared in other parts of the peninsula lies in its consistency. In fact, in the “Neapolitan” version it is grainy and is a cross between coffee and granita. It is the tradition of Neapolitan mothers to bring this cold coffee prepared the day before to the beach, let it cool and then poured into a bottle placed in the freezer; shaking the bottle well to make it grainy, the Neapolitan cold is ready to be enjoyed under the umbrella.

The Shakerato coffee takes its name from the instrument used by the barmen, the shaker in fact, to prepare cocktails. After the Second World War, many bartenders began to offer customers a cold coffee by shaking coffee, ice and sugar. Using this procedure, an excellent cold and creamy drink is obtained.

The coffee cream, also known as “Caffè del nonno”, proposed in the early 2000s, immediately met with great success. Today it remains an inevitable classic of the Neapolitan coffee shop and beyond. The secret of its affirmation is in its simple and genuine ingredients: cream, coffee and sugar. Cold is an excellent remedy to counter the summer heat.

Finally, almond coffee, of Lecce origin, has over time become another must of Neapolitan gastronomy. If the Apulian version plans to pour a teaspoon of almond milk into the coffee prepared with the moka, the Neapolitan recipe calls for the addition of frozen almond milk cubes.

Coffee is the protagonist, in summer, even in ice cream parlors.

Ice-cream coffee is a classic of great taste. The Neapolitan one has always been more successful than the others from different parts of Italy. The reason is, one might say obviously, in the coffee itself: the Neapolitan has a stronger and more decisive taste that makes the ice cream even more special and tasty.

The granita coffee is very popular with Neapolitans and tourists. If in ancient times it was mainly prepared at home – a block of coffee ice was made, a sort of ice plane (also known as grattachecca, especially in Rome) was passed on to the surface and granita was obtained – today it can instead be tasted in every coffee shop and ice cream parlor in the city. Do not miss the version with whipped cream.

Milkshake coffee enters the panorama of summer recipes not only to be in great demand but, above all, due to the ease of preparation: in fact, just pour 1-2 balls of coffee ice cream plus a glass of milk into the mixer bell and blend everything for 2-3 minutes. For the many allergic and intolerant subjects it is possible to request the milkshake also with soy milk, rice or almond milk to replace the vaccine one.

The handmade Coviglia of semifreddo coffee, exclusive to Neapolitan pastry, similar to a mousse, is served using very special glasses (the “cuviglie” were containers that were used in the past for the sweet foams to keep in the cold). Already known in the times of the great 18th century gastronomist Vincenzo Corrado and the journalist and writer Matilde Serao, who even described her in his book Il Paese di Cuccagna, today he is considered the ancestor of ice cream.

Spumone coffee is an ice cream of Neapolitan origin but widespread especially in Salento. Cited in the famous song by Carosone “Io, mammeta e tu” (“Jamm’o bar o ‘o Chiatamone, vuo’ ‘or cuppetto or vuo’ ‘or spumone?”), The dessert has a semi-spherical shape and is composed from two layers: the first, more internal, is a sort of egg mousse, while the outer part is the real coffee ice cream.

Finally, two summer recipes that are enjoying considerable success: Caffè al Cocco and Iced Cappuccino. The first with coconut-flavored whipped cream and the second with cold milk and coffee granita. Truly to try.

Happy holidays and good coffee to everyone.

Neapolitan coffee between hygiene and safety in the workplace