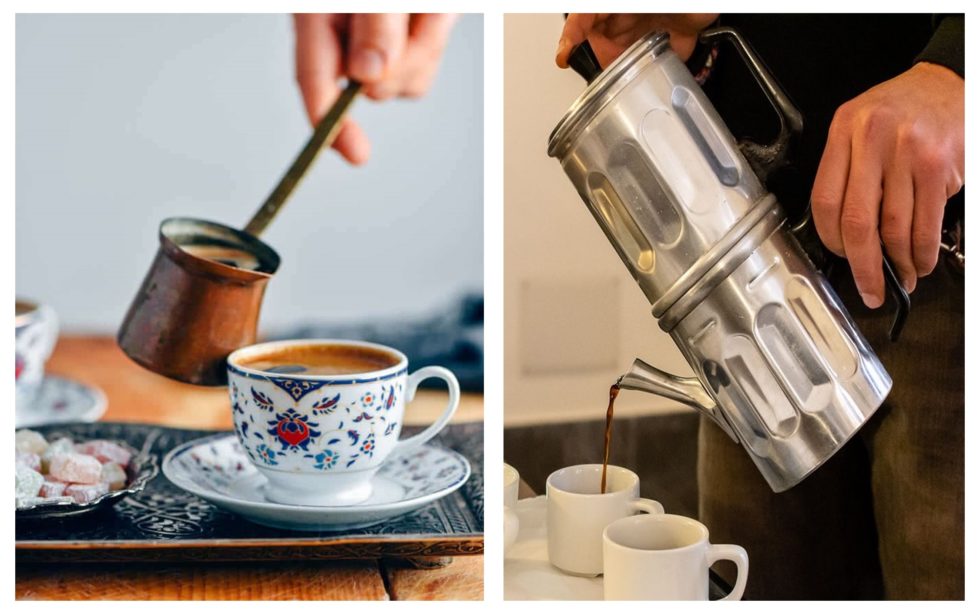 In recent days there has been a lot of talk about the candidacy of the Neapolitan coffee ritual as a UNESCO heritage – ergo: insert our coffee in the list of intangible assets for international protection – on the example of Turkish coffee that, in 2013, succeeded to deserve the important recognition. The Campania Region, professors from various universities and the community (cafeterias, coffee roasters and sector operators), after a long and in-depth study and design work, managed to make a valid application to be presented in Paris, convincing in terms of substance and flawless under the formal one. It is therefore interesting to compare these two ancient ways of preparing coffee.

Turkish coffee or turk kahvesi began to spread in the mid-sixteenth century in Constantinople when the first coffee shops opened and still today in Turkey (and in the Balkans) the way of preparing infusion of coffee remains, considered as the national drink.

Naples, on the other hand, became the city of coffee starting from the early 1800s when the Cuccumella, known as the “Neapolitan” coffee maker (because invented in Naples by the French Morize in 1819), was affirmed, so dear to the great Eduardo De Filippo that, besides to represent a revolution from a technological point of view, it is fundamental for the birth of the “modern coffee” since the filter contained inside the coffee maker no longer releases the coffee powder inside the cup, thus overcoming the ancient Turkish system.

Let’s now analyze the two drinks from a technical point of view. Turkish coffee is made by placing a copper or brass saucepan that has a long handle on the hot sand. When the water contained therein reaches a temperature of about 60 °, the coffee powder is poured inside and left to infuse until the temperature does not exceed 90 ° and it starts to boil and creates a foam that comes out of the ibrik . Only skilled experts are able to seize the right moment to pour the coffee into the cup without losing and wasting the precious drink.

Originally in copper, then replaced by aluminum, the use of Cuccumella completely changes the way of preparing the drink. The coffee powder, ground in a coarser grain, is no longer boiled in the water which, however, brought to the boil in the boiler, turning the machine upside down, passes by falling through the filter containing the coffee and then into the collector.

To use the cezve (another name of the ibrik) we need an Arabica blend, light roasting and very fine grinding, almost impalpable; for our coffee we need the Neapolitan blend (Arabica and Robusta), darker roasting and coarse grinding.

Beyond history, tools and preparation techniques, what is most surprising about the two drinks is their ability to combine, to be an aggregating element, to constitute a social catalyst.

Just as in the Turkish world where sociality develops around the preparation of infused black, in Southern Italy drinking coffee is a time of human aggregation, at home – with the mocha which, over time, then replaced the cuccuma) and on the street (where in bars there is the custom of drinking the classic espresso). Waiting times and rituals associated with drinking coffee (before drinking Turkish, you have to wait a few minutes for the powder to settle on the bottom of the cup; before enjoying the Neapolitan espresso at the bar, a series of steps are respected: drinking the glass of water, always turn the coffee, be careful of the hot cup) are the most interesting profiles from an anthropological and social point of view. More than the differences for the two drinks, therefore, they reveal the common features, the small rituals, the expectations, moments of social sharing that make drinking a magical and exciting coffee experience.