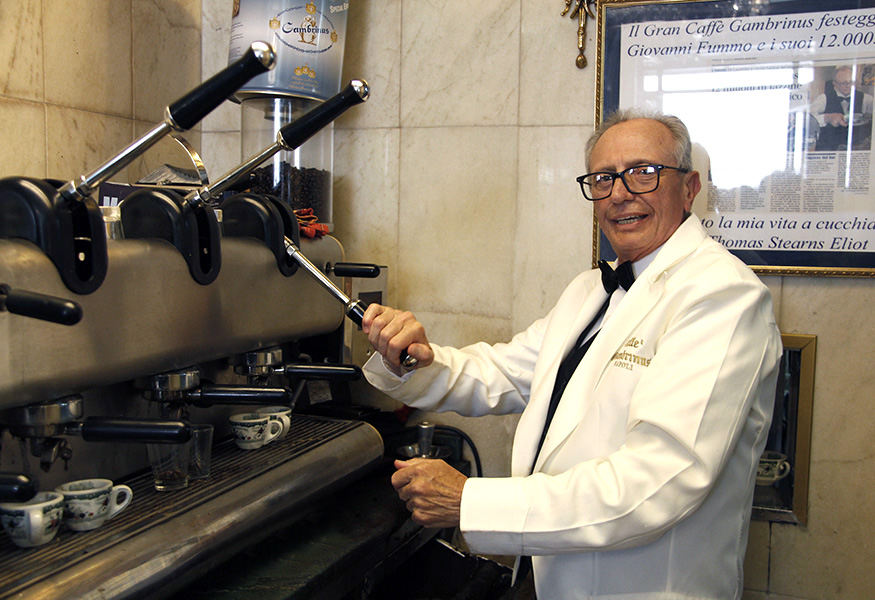 That the Gambrinus is a monument of Naples is known throughout the world, and that in its rooms one can still breathe the atmosphere of the Neapolitan Belle Époque is evident to anyone who sets foot in it, but remember the name and face of those who have contributed to making the historic Caffè great is not always easy.

Among these there is certainly the master coffee maker Giovanni Fummo, born in 1946, now retired, with over 60 years of experience behind him and who represented a fundamental point of reference, not only for colleagues but also for customers who, for years , they found in him a friendly and smiling face.

Giovanni’s bartender’s adventure starts very early, at the tender age of 7, and since then destiny begins to weave his plots; the teacher grows and improves to become so good that he is “required” by the Sergio brothers to work at Gambrinus. In the prestigious Caffè it refines, year after year, its art of coffee making, also collecting compliments from famous people. In particular, there are five presidents of the Republic visiting Naples who he remembers having served and greeted with a handshake (Oscar Luigi Scalfaro, Francesco Cossiga, Carlo Azeglio Ciampi, Giorgio Napolitano and Sergio Mattarella), in addition to the special express prepared for the then US President Bill Clinton and the Capuchin for German Chancellor Angela Merkel.

Giovanni also had the honor of serving the great actress Claudia Cardinale who was in Naples for the filming of the film “I guappi” by Pasquale Squittieri. As the icing on the cake of this very long career could not miss a record: that of having prepared and served 12,000,000 coffees over the course of his very long career! It was August 12th 2015. Television and press everyone at Gambrinus to celebrate this humble and professional bartender.

A thousand ways to make coffee in Naples

Massimo Troisi and the Neapolitan coffee