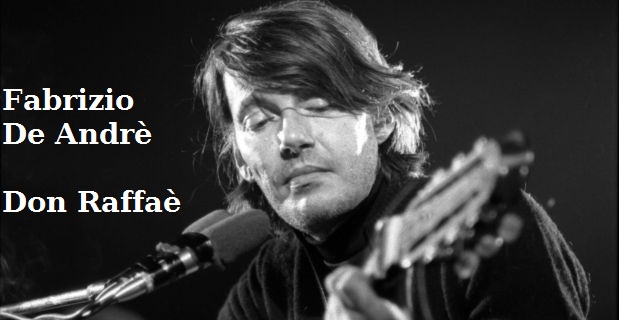 The poet. This is the name most frequently used by critics and the public to indicate the great Genoese singer-songwriter. Twenty years after his death, he is remembered for his innate talent that comes out of his lyrics and his music, both of which are always current, even immortal.

Faber (his followers so affectionately called him) was a simple, genuine and generous man as well as being the great artist that most people know.

Revenue and never again appear in the panorama of Italian pop music, the songs of De André, have inspired many other musicians and songwriters above all for the most disparate areas in which his poems can be placed in music: from the melancholy and sweet rhythms of La canzone by Marinella to the lively and sparkling ones of Bocca di Rosa, from the “march” of La guerra di Piero to the liveliness of Il Pescatore. Minimal common denominator: “important” texts, uncomfortable and rich in poetry. In full artistic maturity De André engages in a new LP (the old long playing 33 rpm vinyl) The clouds of 1990. In this album stands out among others the song Don Raffaé. It is not the first time that De André composes and sings in a dialect different from his own, but perhaps between phonetic and cultural assonances, the Neapolitan dialect is the closest thing there can be to the Genoese: the result shows that the Poet felt the Neapolitan as his own .

The song is an open denunciation of the Italian prison situation, of the links between organized crime and political corruption, of the patronage mentality that, unfortunately, has become common in Italian society. He does not anticipate tangentopoli, he simply censors what his colleagues do not have the courage to do or, worse still, they do not consider themes worthy of being addressed through the universal language of music.

Pasquale Cafiero, Brigadier of the Neapolitan prison of Poggioreale (always one of the most crowded and problematic Italian penitentiary institutions), has a human relationship with the prisoner par excellence, Don Raffaé (the inspiring source is evident: Raffaele Cutulo, founder of the NCO, new organized camorra).

The Cafiero seems to nurture a true adoration for Don Raffaé; in reality it is a question of adulation totally concerned! Praised luxury – it “invests” it in the undisputed role of the most capable politician imaginable, well above the mediocre political professionals – servile pleasures – from personally delivering the newspaper, to improvising a barber, to the point of preparing him the proverbial cup of coffee – constitute the means by which the brigadier tries to grab the benevolence of the powerful prisoner, in order to obtain quite significant personal and family favors. Money requests to round up an incongruous salary, to find an occupation for his brother, to borrow the “good” camel coat for his daughter’s wedding, a famous coat, as well as precious, because Don Raffaé wore it to the maxi-trial. From Neapolitan to Neapolitan, the Cafiero knows what is the most propitious moment to formulate his prayers: in front of the persuasive fragrance of a cup of freshly brewed coffee, as they can even do in prison! It was already sung by Domenico Modugno on a text by Riccardo Pazzaglia ‘O caffè del 1958 which inspires De André who remodels its spirit and meaning: from “Ah, che bell’ ‘o ccafè, sulo a Napule’ o ssanno fa ‘nisciuno if it explains because it is’ a real specialty! “, we move on to” Ah che bell ” o café, also in prison or know how, with the recipe that Ciccirinella, cellmate, gave us, Mama “.

No wonder for us Neapolitans because the Ligurian artist knows very well the ritual of Neapolitan coffee – in reality he is a profound connoisseur of custom and folk traditions from all over Italy – his being a moment of socialization at any level, from the family to the most important rendezvous vous political, business and love. Drinking coffee is for the Neapolitans when and thanks to which they break the ice and accompany every life experience.

Cafiero knows that he will have more chances to bewitch his interlocutor by offering him a steaming coffee and thus find a solution to his daily problems, despite his colleagues and, more generally, honest citizens.

The powerful boss mentioned in the song Don Raffaé is none other than Raffaele Cutolo, founder of the Nuova Camorra Organizzata in the 1970s, in clear opposition to the cartel of the Camorra gangsters coalitioned against him. Shortly after the publication of the disc, Cutolo wrote a letter to De André in which, he complimented and asked him to confirm that he was the inspiring subject of the text. The poet who never escaped confrontation and dialogue with anyone, merely received compliments without, of course, dissolving the doubt of the Camorrista. The correspondence between the two no longer followed any …